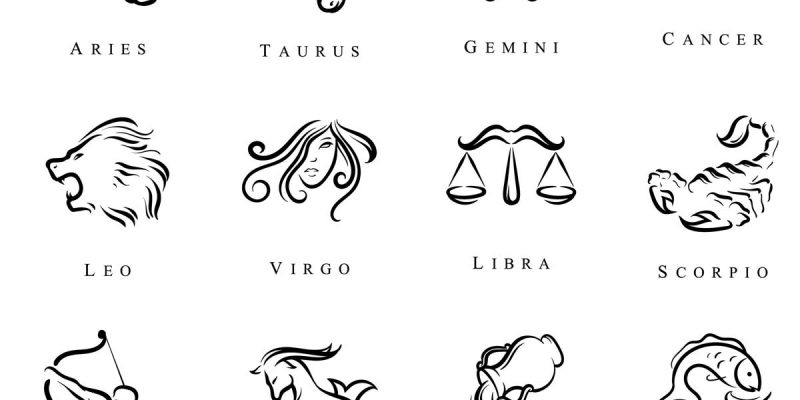 The concept of the Zodiac signs, originating in ancient Babylonian astrology and later influenced by the Hellenistic culture works and relates to human existence under the following principle: “As above, so below”. In other words, the astrological signs are supposed to represent characteristic modes of expression. There are twelve distinct signs, divided by their element: Fire, air, earth and water. They are also divided by their modality: Cardinal, fixed or mutable. Each of the previous characteristics, both elements and modalities represents personality traits that characterize people born under that particular sign.

For example, the element of Fire has a positive polarity and is self-expressive, enthusiastic and full of faith. A cardinal modality represents a dynamic personality, full of initiative and great force of will. Combining these two, Fire and the cardinal modality would result in the Aries sign. The order of the astrological signs is Aries, Taurus, Gemini, Cancer, Leo, Virgo, Libra, Scorpio, Sagittarius, Capricorn, Aquarius and Pisces.

Taurus, (Latin for “The Bull”) is the second astrological sign in the present zodiac. People born between the dates of April 20 to May 20 are born under this sign. The Bull represents a strong –willed character, of great perseverance and determination, a stabilizer of security for himself and others. Grounded and easygoing, trustworthy and reliable, Taureans are lovers of the arts and the finer things in life. Grouped under the earth element, along with the Virgo and the Capricorn, they are like a solid foundation upon which relationships can be built and jobs get done. On their better days, they would best be described as patient, organized, supportive, careful, dedicated and romantic. On their bad days they can slide into the territory of the stubborn, lazy, vain, overcautious and overindulgent.

If they were to be given descriptive keywords it would be the following: Stability, security, elegance, stubbornness, persistence and sensuality.

Virgo is the sixth astrological sign of the Zodiac, represented by the symbol of a Maiden, and begins its cycle around August 23 to September 22. People born between these dates fall under the sign’s influence. Orderly and rule abiding, such people usually focus on control and organization – with perfectionism or analysis through paralysis often becoming an issue. They are extremely dedicated and resourceful individual, with helpful tendencies, analytical and clever, practical minds. Along with the Taurus and Capricorn, they are ruled under the earth element. The Virgo picks right after Taurus, quickly constructing a building plan around Taurus’ solid foundation. A highly mutable sign, the Virgo, unlike the Taurus, is flexible and comfortable with change able to fit themselves in a wide variety of situations.

On their best days they are dedicated, resourceful, helpful, hardworking, clever and practical. On their worst, they can be seen as preachy, overwhelmed, self-pitying, uptight, overly critical or even self-destructive.

If they were to be given keywords to best describe them, they would be the following: Helpfulness, order, organization and purity.

So, how do these two signs work together? Taurus and Virgo can find much in common as they are both ruled by the Earth Element, but their attitudes towards things differ. The Virgo may very well become impatient with the Taurus, wanting more to happen quicker and more efficiently whereas the Taurus shuns haste and easily gets tired without a consistent stream of encouragement. The Taurus side of the couple should take great care not to become too static or they won’t have much of a future together.

When it comes to communication, both being Earth-ruled, they should try to not get too rigid with their point of view and convictions. Instead, they should try to find middle ground and build trust. It will take much patience and persistence from the Taurus to push through the Virgo’s innate lack of trust, in order to let the couple’s feeling grow and evolve into a strong and deep relationship.

Sexually, there is a lot of potential here. The Virgo’s initial uptightness and modesty is bound to eventually get unbuckled by the extreme sensuality of the Taurus. With her barriers shattered and her sexually set free, the Virgo will enjoy a high quality sex life with her partner. However, a potential problem could surface due to the innate need of the Virgo to go into extreme detail and analyze everything – a practice that could devastate the spontaneity of a couple’s sex life, let alone their partner’s self-esteem.

While certainly not a “perfect” couple, the Taurus and the Virgo do seem to work well together. Having much in common and simultaneously complimenting each other greatly, assuming a reasonably open-minded approach leaving room for each other’s differentiating points, a Virgo and a Taurus could make each other really happy for a long, stable period of time.

Most people don’t pay much heed to their or their partner's horoscope. Thinking that the…

Cancer and Virgo, Compatibility in Love and Friendship

How compatible are Cancer and Virgo? Be it in friendship or love, the foundation of…

Are Compatibility Tests For Couples True?

The dating community online is filled with different trends that come and go. One of…